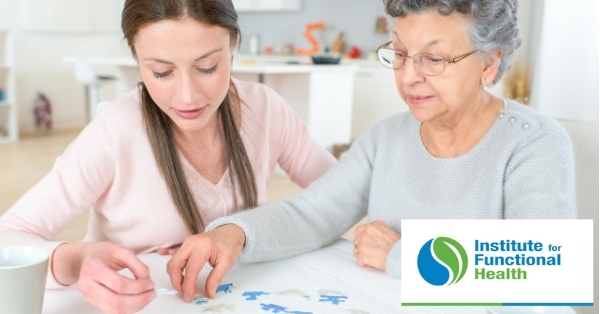 Dementia has become a major health issue this past decade, so much so that it had jumped to being one of the top 10 leading causes of death according to the World Health Organization. As a potential threat to successful aging, early identification of risk factors becomes particularly important since progressive changes can be irreversible. And these changes deeply affect not only the individual, but also those family and friends closest to them.

So, in looking to identify risk, look no further than towards your toes for one measure. If you can’t see them, that could be an issue. For older adults, your current belly size could be a key indicator in whether you have the potential to develop dementia within the next decade or two. If you’re female, that risk becomes even greater.

According to a study in the International Journal of Epidemiology, the risk for dementia is 28% for men and women over 50 when taking body mass index and waist circumference into account together. If you’re a woman in later adulthood and you’re carrying above average belly fat, those extra pounds can lead to a 39% increased risk of dementia within 15 years compared with those who have a normal waist circumference!

In following up with over 18,000 study participants at points over time, researchers concluded that a larger waist size related to an increased dementia risk, especially in women. Those who developed dementia were an average of 71.8 years old at the time of their baseline assessment, while those not affected by dementia had a mean age of 61.9 years old when they entered the study.

Several prior studies have shown the same trend, that as belly size gets larger, the memory center in the brain gets smaller. Several explanations for this relationship have been brought up, surmising that:

Since it is known that individual lifestyle behaviors could help stave off cognitive decline, the researchers gave the participants some preventative recommendations. From 50 possible options, each subject was given 21 behaviors they could attempt to use to help combat the onset of dementia. The results showed that interventions related to nutrition and physical activity came in as the two most important items on their list by far. Following healthy eating routines, reducing alcohol consumption and maintaining a regular exercise routine should be the basics in helping to protect our brains and quality of life from the ravaging effects of dementia.

Many other factors play into dementia risk, but to keep it simple on one level, people who want to protect their brain health over time should pay attention to their waist size.